Meeker County (pop. 23,300) is just east of Kandiyohi County. It was named for Judge B.B. Meeker.

The county seat is Litchfield (pop. 6,726). U.S. Highway 12, which runs from Aberdeen, Wash., to Detroit, Mich., goes through downtown Litchfield.

The Grand Army of the Republic Hall (1885) in Litchfield is adjacent to the Meeker Historical Society Museum. 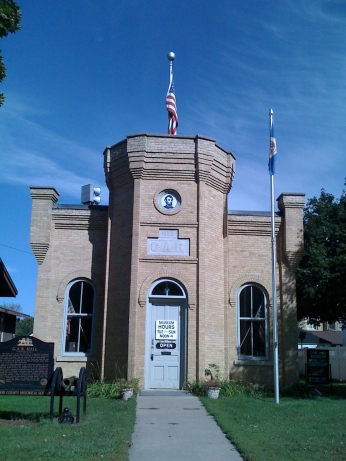 One of four remaining GAR halls in Minnesota

Litchfield has the three-screen, Art Deco Hollywood Theatre (1936), as well as the Starlite 5 Drive-In (summer only).

Famous for its marquee

The town of Cosmos (pop. 473) has a Space Festival every summer.

The town of Darwin (pop. 350) claims to have the World’s Largest Ball of Twine.

Darwin was named for E. Darwin Litchfield, an Englishman who promoted the St. Paul and Pacific Railroad. The county seat was also named for Mr. Litchfield.

Not for the author of “On the Origin of Species”