Lincoln County  (pop. 34,457) is on the Atlantic coast of Maine, just east of Sagadahoc County. It is the state’s third-smallest county in square miles.

When founded in 1760, it covered three-fifths of Maine.

It is one of 23 Lincoln counties in the U.S., and it’s one of several that were not named for Abraham Lincoln.

It was named for Lincoln, England.

With 451 miles of coastline, Lincoln County is a popular area for summer tourism.

Castle Tucker is a mansion built in 1807, when Wiscasset was at the peak of its prosperity as a port. It is now a museum.

Built in the Regency style

Red’s Eats is a legendary take-out restaurant in Wiscasset. It’s been at the same location since 1954. 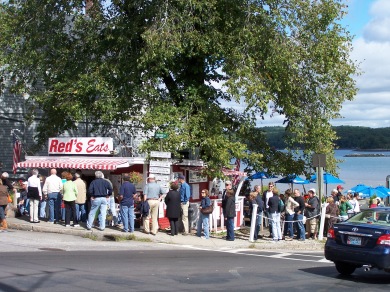 The town of Waldoboro (pop. 5,075) is the home of Fawcett’s Antique Toy and Art Museum

Monhegan Island, 12 miles off the coast, has a population of about 65.

Part of All Saints Parish

The coastal town of Boothbay Harbor (pop. 2,165) has a lighthouse called Cuckolds Light (1907) and a giant statue of an old fisherman.

Parts of the 1956 musical “Carousel” were filmed in Boothbay Harbor.