Waldo County (pop. 38,786) is between Knox and Hancock counties, along the Atlantic coast. It was named for Samuel Waldo (1696-1759), a native of Boston who was involved in the early settlement of Maine.

The county seat of Waldo County is Belfast (pop. 6,668).  Over the years, Belfast has been a center of shipbuilding, seafood processing, and poultry processing – and it is now well-known by tourists for its 19th-century architecture.

The First Church of Belfast dates from 1818.

The Colonial Theatre in Belfast was built in 1924. It shows a variety of first-run, independent, and foreign films.

It has an elephant on the roof.

Perry’s Nut House has been a roadside attraction in Belfast since 1927.

The town of Searsport (pop. 2,615) calls itself the Antique Capital of Maine.

In the town of Prospect (pop. 709) are Fort Knox, dating from 1844, and the Penobscot Narrows Bridge (over the Penobscot River to Verona Island), built in 2006.

The town of Unity (pop. 2,099) is the home of Unity College, which opened in 1965. Its curriculum focuses on the environment and natural resources. 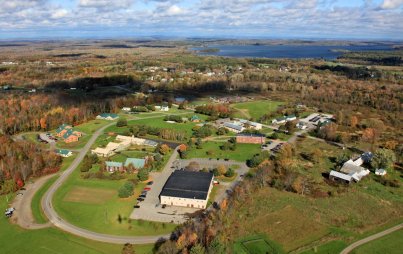