Alger County (pop. 9,601) is on the southern shore of Lake Superior. It’s the only Alger County in the U.S.

The county was named for Russell A. Alger (1836-1907), a lumber baron who later served as governor of Michigan, U.S. senator, and secretary of war for President William McKinley.

Also an officer in the Civil War

The county seat of Alger County is Munising (pop. 2,355), located at the south end of Munising Bay and at the mouth of the seven-mile-long Anna River.

The Munising area is known for its scenic waterfalls.

“Munising” is derived from the Ojibway language, meaning “near the island.” The city is a half-mile from Grand Island; a passenger ferry connects Munising with Grand Island National Recreation Area.

Pictured Rocks National Lakeshore, east of Munising, extends for 42 miles along the shore of Lake Superior.

Just west of Munising is the unincorporated community of Christmas, which once had a factory making gifts for sale at Christmas time.

The unincorporated community of Trenary is known for its annual outhouse races at the Trenary Outhouse Classic, held Feb. 22 this year.

The outhouses are placed on skis and pushed.

Trenary is also known for the Trenary Home Bakery, which makes the popular Trenary cinnamon toast, available by mail order. 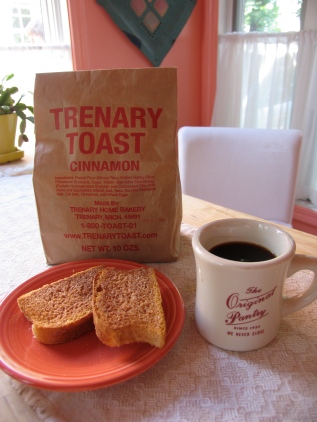 The Eben Ice Caves are a local attraction in winter. They are in the Rock River Wilderness in Hiawatha National Forest.

The “Pickle Barrel House,” in Grand Marais, is a two-story cabin that was built (in 1926) to resemble two barrels. It was originally a family’s summer cabin.

Now restored and open for tours