The county was named for Charles Gratiot (1786-1855), who was the engineer in charge of the 1814 reconstruction of a fort that guarded the mouth of the St. Clair River at Lake Huron.

Gratiot, Ohio, is also named for him.

Alma calls itself “Scotland, U.S.A.” Its annual Alma Highland Festival is one of the largest Scottish festivals in the Midwest.

Alma College is a private, liberal arts college with about 1,400 students. It was established in 1886.

The school mascot is Scotty.

The Strand Theatre in Alma is now used by the Gratiot County Players.

The city of St. Louis (pop. 7,482) calls itself the “Middle of the Mitten” because of its geographical location in Michigan.

St. Louis is also known for its Mini-Mackinac Bridge. 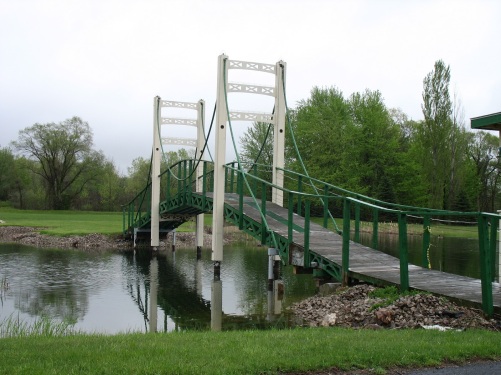 Bradbury Robinson (1884-1949), who threw the first forward pass in the history of American football, practiced medicine in St. Louis and served two terms as mayor.

“Father of the Forward Pass” at St. Louis University, Missouri

The unincorporated community of Elm Hall has the smallest post office in Michigan.