Huron County (pop. 33,118), on the Thumb of Michigan, has the waters of Lake Huron and Saginaw Bay on three sides. The only other Huron counties are in Ohio and Ontario.

With 90 miles of shoreline, Huron County is popular with summer tourists.

The Thumb Fire of 1881 burned more than a million acres in one day, killing 282 people in Huron, Tuscola, Sanilac, and Lapeer counties.

The shaded part did not burn.

The county seat of Huron County is the city of Bad Axe (pop. 3,462), which was named for a badly damaged axe that was found by surveyors at the site where the city was to be built.

The sports teams at Bad Axe High School are known as the Hatchets.

Bad Axe has the nation’s only Bad Axe Theatre; it is still showing first-run movies.

The unincorporated community of Bay Port, on Saginaw Bay, is known for its annual Fish Sandwich Festival, featuring sandwiches so big that “it takes two hands to hold them.”

The city of Caseville (pop. 777), the “Perch Capital of Michigan,” has an annual “Cheeseburger in Caseville” festival.

The city of Harbor Beach (pop. 1,703), on Lake Huron, claims to have the world’s largest man-made freshwater harbor.

Huron City  is the home of the Pointe Aux Barques Lighthouse (1857). 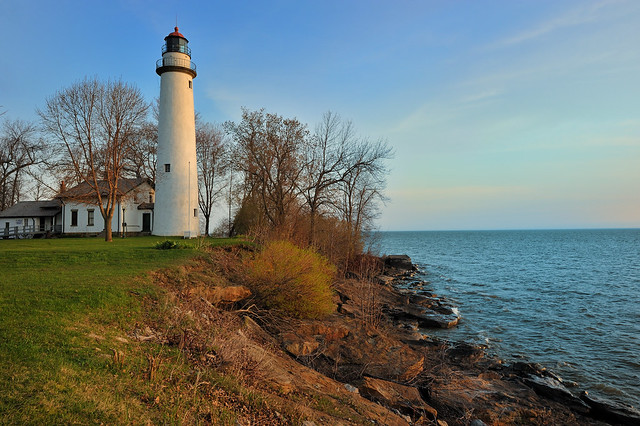 Now open as a museum