St. Clair County (pop. 163,040) borders Lake Huron, the province of Ontario (on the other side of the St. Clair River), and Lake St. Clair. The states of Alabama, Illinois, and Missouri also have St. Clair counties.

The county seat of St. Clair County is the city of Port Huron (pop. 30,184), located at the southern end of Lake Huron. Port Huron is the easternmost point of land in Michigan.

The Fort Gratiot Lighthouse has protected the entrance to the St. Clair River since 1829. 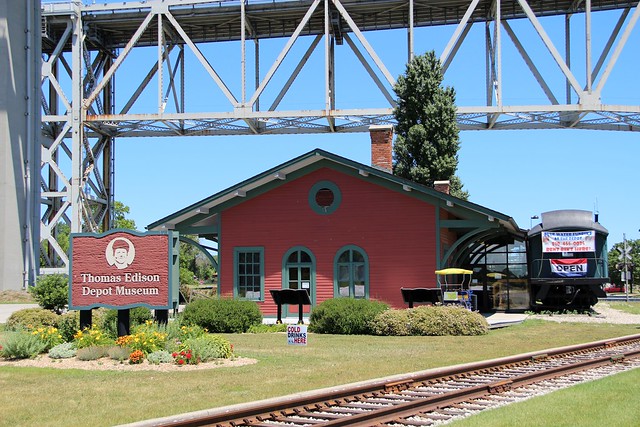 Thomas Edison (1847-1931) grew up in Port Huron. He sold candy and newspapers on trains running between Port Huron and Detroit.

The former Carnegie Library (1904) in Port Huron is now the main building of the Port Huron Museum.

Port Huron is known for the Port Huron Statement, a 1962 manifesto by the Students for a Democratic Society, written in Port Huron at the SDS’s first national convention.

The city of Yale (pop. 1,955), northwest of Port Huron, calls itself “The Bologna Capital of the World.”

The city of St. Clair (pop. 5,485) claims to have the world’s longest freshwater boardwalk.

On the St. Clair River