The headquarters of Motown Records is now the Motown Museum. 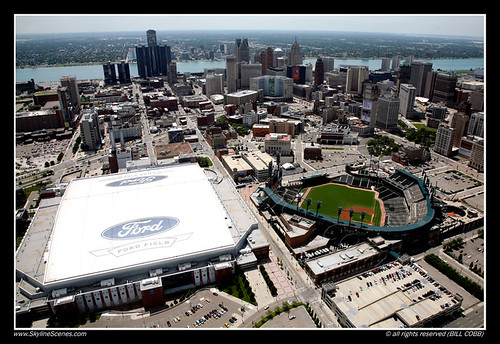 Ford Field on the left

The Fox in St. Louis is slightly smaller than this.

Dearborn (pop. 98,153), just west of Detroit, is the home of the Ford River Rouge Complex. When it was completed in 1928, it was the largest integrated factory in the world – about 1.5 miles long by 1 mile wide.

It’s still there, but much smaller.

Also in Dearborn, the Henry Ford Museum and Greenfield Village is the largest indoor-outdoor museum complex in the U.S.

Arab-Americans make up about 42% of Dearborn’s population; this is the largest percentage of Arab-Americans in any city in the U.S.

The city of Grosse Pointe (pop. 5,421) is east of Detroit; the movie “Grosse Pointe Blank” (1997) was actually filmed in Southern California.

The city of Plymouth (pop. 9,132), in the northwestern corner of Wayne County, was once known as the “BB Gun Capital of the World,” with seven BB gun companies in the area.