Washtenaw County (pop. 344,791) is west of Wayne County. “Washtenaw” is derived from an Ojibwa word meaning “far away water.”

The “Ann” apparently came from Ann Allen, wife of one of the city’s founders, and the “Arbor” from the word for a shady area under a tree or bower.

Ann Arbor is home of the University of Michigan, founded in 1817 in Detroit and established in Ann Arbor in 1837. It has about 43,000 students. Michigan Stadium (1927) is America’s largest stadium.

The “Sine Wave Field” on the North Campus was designed by Maya Lin in 1995; she later designed the Vietnam Memorial in Washington, D.C. 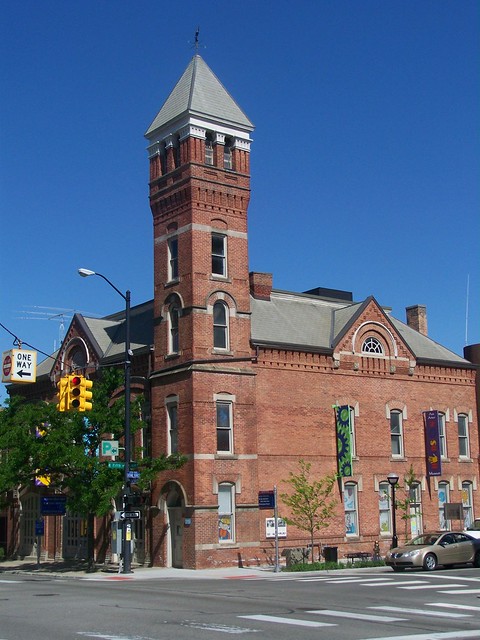 Borders bookstores began in Ann Arbor in 1971, founded by brothers Tom and Louis Borders. The last Borders stores closed in 2011.

This was the flagship store in Ann Arbor.

The city was named for Demetrius Ypsilanti (1793-1832), a hero in the Greek War of Independence.

Tom Monaghan started Domino’s Pizza in Ypsilanti in 1960. It is now the second-largest pizza chain in the U.S.

“Ypsi” is the home of Eastern Michigan University, founded in 1849 as Michigan State Normal School. It has about 23,000 students.

In the Mid-American Conference

In the western part of the county, the city of Chelsea (pop. 4,944) is the home of the Chelsea Milling Company, known for Jiffy baking mixes sold in a small box.