The Jackson County Courthouse (1928) was originally the Elks Temple.

Jackson was a center of the automobile industry in the early 20th century, with more than 20 different manufacturers. The city reached its peak population of 55,187 in 1930.

The tallest building in Jackson is the 17-story Jackson County Tower, built in 1929 as the Union and Peoples National Bank. 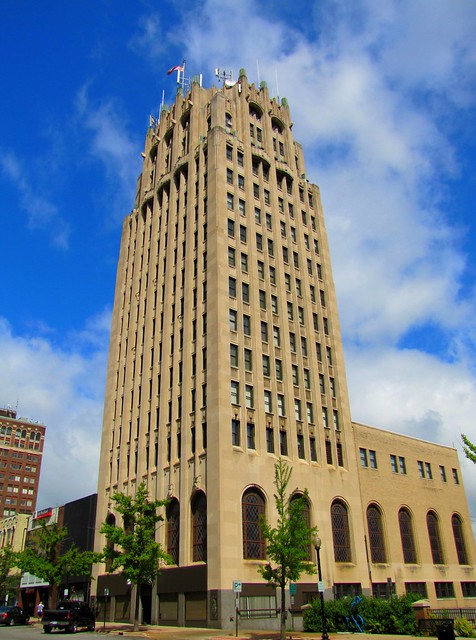 It now has county offices.

The Michigan Theatre in Jackson was built in 1930. Cascade Falls is a man-made waterfall in Jackson’s Cascade Park, built in 1932.

Amtrak’s “Wolverine” train, between Pontiac and Chicago, stops at Jackson’s former Union Station, which dates from 1872. The depot is one of the oldest continually operating stations in the U.S.

Michigan State Prison (1839) in Jackson was Michigan’s first prison. The prison is still in operation; tours are available.

Famous people who were born in or grew up in Jackson include TV host Jack Paar, football coach Tony Dungy, and volleyball player Karch Kiraly. U.S. Supreme Court Justice Potter Stewart was born in Jackson (in 1915) while his parents were on vacation.

The Jackson County village of Grass Lake (pop. 1,173) is the home of the Michigan Whitetail Hall of Fame Museum.

The village of Concord (pop. 1,050) is known for the Mail Pouch Tobacco sign on a downtown building.