Lenawee County (pop. 99,892) is east of Hillsdale County, along Michigan’s southern border with Ohio. It is the only Lenawee County in the U.S.

Around the turn of the 20th century, Adrian was known as the “Fence Capital of the World” because of its wire fence manufacturing plants.

The Adrian Engine House No. 1 is an historic fire station built in 1855. It now houses private offices. 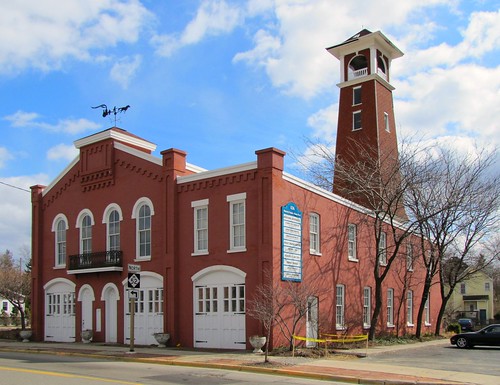 The Adrian Public Library (1909) building is now the home of the Lenawee County Historical Society Museum.

Next door to the old fire station

The Croswell Opera House (1866) in Adrian is the oldest continuously running theater in the state. It was a movie theater from 1921 to 1967.

Adrian College, founded in 1859, is affiliated with the United Methodist Church. It has about 1,600 students.

Founded as a theological institute

The Irish Hills Towers, in northern Lenawee County, are wooden observation towers built in 1924 to boost tourism in the area. They have been closed to the public since 2000.

The city of Tecumseh (pop. 8,521) was once known as the “Refrigeration Capital of the World” because of the manufacture of refrigeration products. Tecumseh Products moved its factory from Tecumseh to Mississippi in 2008.