The Columbia River makes up part of the southern and western borders of the county; the Grand Coulee Dam (on the Columbia) is in the far northeastern corner of the county.

Construction of the Grand Coulee Dam (1933-1942) eventually led to the Columbia Basin Project – the largest water reclamation project in the U.S. As a result, a huge area of former desert in southern Grant County is now irrigated farmland.

More than 40 different crops are grown in the county, including tree fruit, wheat, corn, and a variety of vegetables.

Named for the adjacent lake

The Moses Lake Museum and Art Center has a life-size sculpture of a Columbian mammath, made entirely of farm implements.

The city of Mattawa (pop. 4,437) has a library constructed with 330 bales of straw, plus wire mesh and stucco.

First one in the U.S.

The city of Soap Lake (pop. 1,514) is the home of the 9-hole, par-3 Lava Links Desert Golf, where golfers play through sagebrush, sand, and desert vegetation.

The city of George (Washington) has a population of 501. The “World’s Largest Cherry Pie” is baked there every July 4. 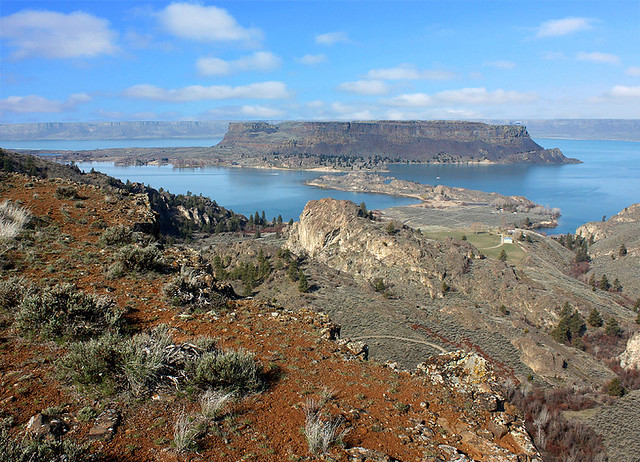