Spokane County (pop. 471,221) is north of Whitman County. It is Washington’s fourth-most-populous county.

The county seat of Spokane C0unty is the city of Spokane (pop. 208,916), second-largest city in Washington. The city and county were named for the Spokane tribe.

Spokane hosted a World’s Fair (Expo ’74) in the downtown area along the Spokane River. The fair featured the world’s first IMAX theater, inside the United States Pavilion. 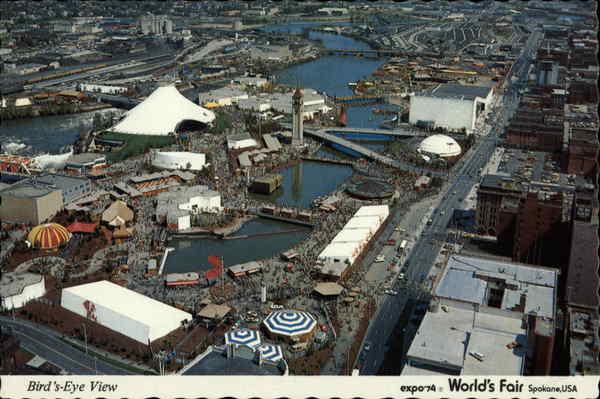 Riverfront Park now occupies much of the site.

River Park Square is an enclosed shopping mall in downtown Spokane; it opened in 1974 and was renovated in 1999. Anchor stores are Macy’s and Nordstrom.

The movie theater has 20 screens.

The Davenport Hotel in downtown Spokane, which opened in 1914, was the first U.S. hotel with air conditioning. It was renovated in 2002. Lobby of the Davenport Hotel

The Fox Theater, built in 1931 in the Art Deco style, is now the Martin Woldson Theater. It is the home of the Spokane Symphony.

View from the stage

Another local landmark is the giant red wagon in Riverfront Park. It was built in 1990.

It has a slide for children.

Father’s Day was founded at the YMCA in Spokane in 1910. It is now celebrated in the U.S. on the third Sunday in June.

Spokane is the home of Gonzaga University, a Roman Catholic university founded in 1887, and Whitworth University (1890), affiliated with the Presbyterian church.

John Stockton is in the Basketball Hall of Fame.

About 16 miles southwest of Spokane is the city of Cheney, home of Eastern Washington University, a public university with about 12,000 students. It has a ski area.