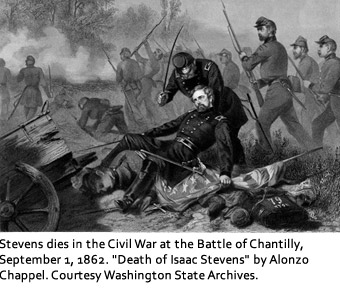 Minnesota’s was also named for him.

The county is bordered by British Columbia on the north, the Spokane River on the south, and the Columbia and Kettle rivers on the west.

The county seat of Stevens County is the city of Colville (pop. 4,673).

The Alpine Theater in Colville shows first-run movies. The Auto-Vue Drive-In in Colville was eastern Washington’s last drive-in theater when it closed in 2013.

The city of Kettle Falls (pop. 1,595) was named for the nearby falls on the Columbia River – an important fishing site for Native Americans until it was covered by the waters of Franklin D. Roosevelt Lake in 1941.