Yakima County (pop. 243,231) is south of Kittitas County. It is Washington’s second-largest county in square miles.

The Yakama Indian Reservation makes up about 36 percent of the county.

The county seat of Yakima County is the city of Yakima (pop. 91,067), located on the 214-mile Yakima River, a tributary of the Columbia.

William O. Douglas (1898-1980), longest-serving justice on the U.S. Supreme Court (36 years), grew up in Yakima and was valedictorian at Yakima High School.

The Capitol Theatre in downtown Yakima opened in 1920 as the Mercy Theatre. It is now the home of the Yakima Symphony Orchestra.

Renovated after a fire in 1975

Author Raymond Carver (1938-1988) grew up in Yakima and graduated from Yakima High School.

Singer Gary Puckett grew up in Yakima and named his band Gary Puckett and the Union Gap (in 1967) for the nearby city of Union Gap.

That’s Gary in the middle.

Farms in the Yakima Valley, irrigated by the Yakima River, raise products such as grapes (about 50 wineries), apples, cherries, and about 75 percent of the hops grown in the U.S.

Southeast of Yakima, the city of Zillah (pop. 2,964) is the home of the Christian Worship Center – also known as the Church of God-Zillah.

Also in Zillah is the former Teapot Dome Service Station (1922). 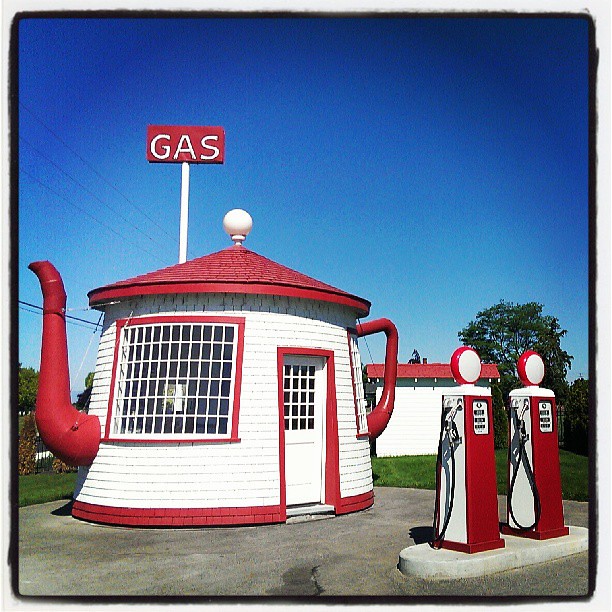 No longer in operation

Nearby, the city of Granger (pop. 3,246) has a collection of about 30 cement dinosaur sculptures, scattered around town.