Cowlitz County (pop. 102,410) is north of Clark County, on the Columbia River. Its name comes from a Cowlitz Indian word meaning either “river of shifting sands” or “capturing the medicine spirit.”

The mountain itself is in Skamania County.

The county seat of Cowlitz County is the city of Kelso (pop. 11,925), located near the confluence of the Cowlitz and Columbia rivers.

In 1998-99, the slow-moving Aldercrest-Banyon landslide caused the evacuation and condemnation of 127 homes in Kelso.

More than $70 million in damages

The largest city in Cowlitz County is Longview (pop. 36,648), across the Cowlitz River from Kelso.

Longview was a planned city, built by timber baron Robert A. Long in the early 1920s to house lumber mill workers for the Long-Bell Lumber Company.

The Lewis and Clark Bridge (1930) crosses the Columbia River between Longview and Rainier, Oregon. 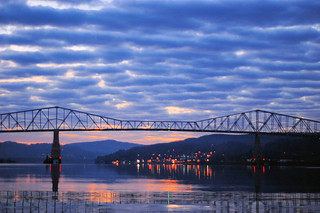 The Green Day song “Longview” was the fourth track on the band’s third album, “Dookie.” It was Green Day’s debut single.

The “Nutty Narrows Bridge” is a 60-foot squirrel bridge that crosses Olympia Way in downtown Longview. It dates from 1963.