Lewis County (pop. 75,455) is north of Cowlitz and Skamania counties. It is one of seven Lewis counties, and one of five named for Meriwether Lewis (1774-1809), leader of the Lewis and Clark Expedition.

The county seat of Lewis County is the city of Chehalis (pronounced “shuh-HAY-lis”), which has a population of 7,259.

On the north side of Chehalis is a “Yard Bird” statue, left over from a well-known local chain of Yard Bird stores that has gone out of business.

Centralia (pop. 16,336), the largest city in Lewis County, is just four miles north of Chehalis. It got its name because of its central location between Seattle and the Columbia River.

Giant pencil on a porch, Centralia 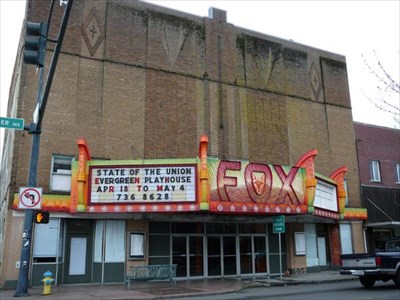 The Amtrak station in Centralia is the former Union Depot (1912). It is served by Amtrak’s “Cascades” and “Coast Starlight” trains. In the community of Claquato, west of Chehalis, the Claquato Church (1857) is the oldest standing church building in Washington.

Claquato was briefly the county seat.

The city of Winlock (pop. 1,329), south of Chehalis, is the home of “The World’s Largest Egg” – as reported in “Ripley’s Believe It or Not” in 1989. The egg industry has been important in the area.