Jefferson County (pop. 29,872), south of Clallam County, stretches from the Pacific Ocean to Puget Sound, with the Olympic Mountains in the middle. No roads cross directly from the county’s west side to its east side. It is one of 25 Jefferson Counties (and one Jefferson parish) in the U.S. – all named, directly or indirectly, for President Thomas Jefferson (1743-1826).

Mount Olympus (elev. 7,980) is the highest point in Olympic National Park. Because of its heavy winter snowfall, it supports several large glaciers – the longest of which is three miles long.

Temperate rainforests in the western part of Olympic National Park have about 150 inches of annual precipitation.

The county seat of Jefferson County (and its only incorporated city) is Port Townsend (pop. 9,126), on the northeastern tip of the Olympic Peninsula.

The 75-foot Fire Bell Tower in Port Townsend dates from 1890. 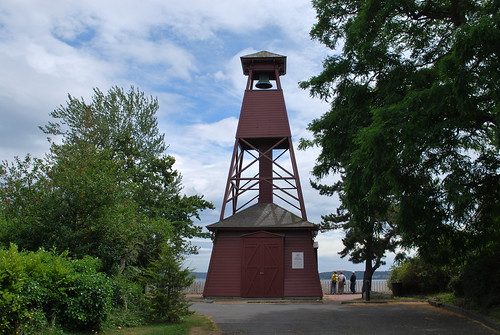 Fort Worden, in Port Townsend, was built in 1897-1900 as an Army base to protect Puget Sound from enemy invasion. No hostile shots were ever fired.

Manresa Castle, originally a 30-room private home built in 1892, is now a hotel and restaurant.

It was also a Jesuit training center for many years.

The Rose Theatre in Port Townsend opened as a vaudeville theater in 1907. It now shows a variety of independent films.

South of Port Townsend is Fat Smitty’s Restaurant, known for its burgers, outdoor decorations, and dollar bills attached to the ceiling and walls.