Grays Harbor County (pop. 72,797) is south of Jefferson County. It was named for Grays Harbor, the large estuarine bay in the southwestern corner of the county.

Grays Harbor was named for Robert Gray (1755-1806), an American merchant sea captain who pioneered the maritime fur trade in the Northwest and discovered the bay.

He also named the Columbia River.

The county has historically depended on the timber and fishing industries; several of its cities, including Aberdeen and Hoquiam, reached their peak populations in 1930.

Timber crew on the Chehalis River

The county seat of Grays Harbor County is the city of Montesano (pop. 3,976).

The largest city in the county is Aberdeen (pop. 16,896), located where the Chehalis River empties into Grays Harbor.

Kurt Cobain (1967-1994), leader of the rock band Nirvana, was born in Aberdeen and dropped out of Aberdeen High School late in his senior year.

Grays Harbor College is a community college in Aberdeen, founded in 1930. The athletic teams are called the Chokers – an old term for the men who wrestled giant logs out of the nearby forests.

The Lady Washington, home-ported in Aberdeen, is a replica of an 18th-century merchant sailing ship. Built in 1989, it has been featured in several movies.

Including the first “Pirates of the Caribbean” movie

Just west of Aberdeen is the city of Hoquiam (pop. 8,726). Its 7th Street Theatre is an atmospheric theater built in 1928.

East of Montesano, the Satsop Nuclear Power Plant was built from 1976 to 1983 but never completed, because of a budget shortfall. The twin cooling towers are a local landmark.

The city of Westport (pop. 2,099), at the entrance to Grays Harbor, has one of the largest marinas in the Northwest. The Grays Harbor Light (1898), at 107 feet, is the tallest lighthouse in Washington. 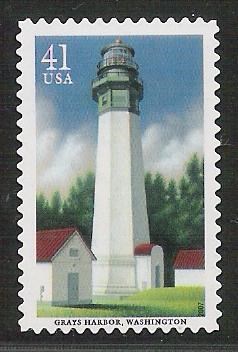 Farther north, the Copalis State Airport is the only airport in Washington where landing on the beach is legal. The runway is 4,500 feet long.

Only available during low tide