Baker County (pop. 27,115) is east of Columbia County, on the border with Georgia. It is one of three Baker counties in the U.S.

The 126-mile St. Marys River begins in the Okefenokee Swamp in Georgia and dips into Florida, forming the border between the states until it reaches the Atlantic Ocean. The county seat of Baker County is the city of Macclenny (pop. 6,374). The former courthouse is now the library. 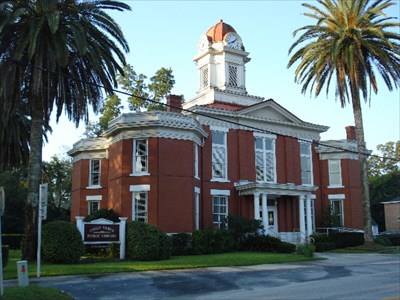 Macclenny was named for local businessman Carr McClenny – but the city’s name had to be changed because the post office did not allow capital letters in the middle of a word.

In the unincorporated community of Olustee, the former train depot is now the visitor center for the Osceola National Forest. The depot has been relocated twice.

The Battle of Olustee, in 1864, was the largest Civil War battle fought in Florida. Olustee Battlefield Historic State Park commemorates the event.