One of Florida’s two original counties

Its county seat, St. Augustine (pop. 12,975), is the oldest continuously occupied European settlement in the continental United States. It’s been a major tourist destination since the late 19th century.

The Ponce de Leon Hotel (1888) was built by Henry Flagler, a founder of Standard Oil and an early leader in the development of Florida’s Atlantic Coast. It is now part of Flagler College (1968).

Across the street from the former Ponce de Leon Hotel is the former Hotel Alcazar (1887), which now contains the St. Augustine City Hall and the Lightner Museum.

The Castillo de San Marcos, the oldest masonry fort in the continental U.S., was built from 1672 to 1695, when Florida was part of the Spanish Empire.

The Cathedral Basilica of St. Augustine is the oldest church in Florida. It was established in 1565 and rebuilt in the 18th century. 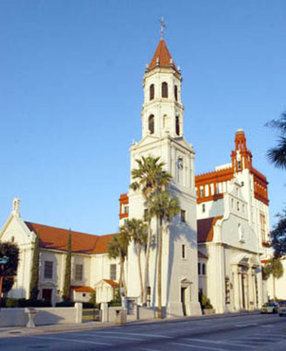 Nombre de Dios, a Spanish Catholic mission founded in 1587, has a 204-foot cross that may be the world’s tallest free-standing cross.

The St. Augustine Light (1874) is an active lighthouse and a museum.

Stairway to the top

The St. Augustine Alligator Farm Zoological Park, which opened in 1893, now has ziplines that pass over the alligators and crocodiles.

The World Golf Hall of Fame is in World Golf Village, north of St. Augustine. The headquarters of the PGA Tour is nearby in Ponte Vedra Beach.