Putnam County (pop. 74,364), northeast of Marion County, was named for Benjamin A. Putnam, first president of the Florida Historical Society.

One of nine Putnam counties

Angel’s, in Palatka, is Florida’s oldest diner. The former railroad dining car has been parked there since 1932.

The Larimer Memorial Library (1929) is now the Larimer Arts Center.

Palatka Union Depot serves Amtrak’s “Silver Meteor” and “Silver Star” trains, both between New York City and Miami. The station is also the home of the David Browning Railroad Museum. 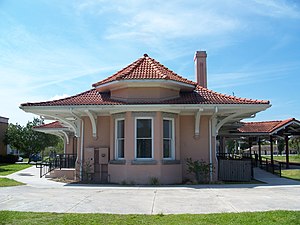 The town of Welaka (pop. 586) is the home of the Welaka National Fish Hatchery, the only national fish hatchery in Florida.

Crescent City (pop. 1,780) was the birthplace of A. Philip Randolph (1889-1979), founder of the Brotherhood of Sleeping Car Porters and civil rights leader.

The Fort Gates Ferry, a one-mile auto ferry across the St. Johns River, is the oldest operating car ferry in Florida.