In addition to its many lakes, the county is the site of Sugarloaf Mountain (312 feet) – the highest point in peninsular Florida and the state’s most prominent point, relative to its surrounding area.

View toward the mountain

The county seat of Lake County is the city of Tavares (pop. 13,992). The old courthouse now houses the Lake County Historical Museum.

The largest city in Lake County is Clermont (pop. 28,849), site of the 226-foot Citrus Tower. It was designed as an observation tower overlooking citrus trees, Today, it’s above a growing city.

Nearby, the Twistee Treat building is shaped and painted like a giant ice cream cone.

The city of Eustis (pop. 18,605) has hosted the GeorgeFest, in honor of George Washington, for 113 consecutive years. It’s the second-longest-running George Washington’s Birthday festival in the U.S.

The movie “Honky Tonk Freeway” (1981) was filmed in Mount Dora. Much of the town was painted pink for the filming. 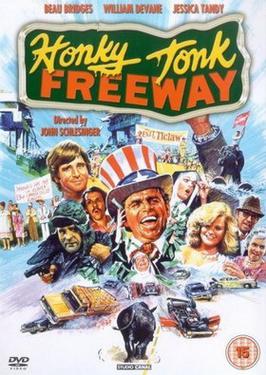 Pulled from theaters after one week

The city of Leesburg (pop. 20,464) is known for the 64-acre Venetian Gardens, a park on the shores of Lake Harris.

Walt Disney’s parents, Elias and Flora Disney, were married in 1888 in Lake County – about 50 miles from where Walt would build Walt Disney World.