Pinellas County (pop. 916,542) is Florida’s second-smallest county, with just 280 square miles. Most of the county is on the Pinellas Peninsula, between the Gulf of Mexico and Tampa Bay.

35 miles of beaches and dunes on 11 barrier islands

The county broke away from Hillsborough County in 1912 because transportation to the county seat of Tampa was so difficult.

Now there are bridges. 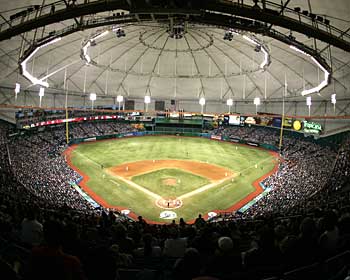 Tropicana Field, home of the Rays

The Salvador Dali Museum in St. Petersburg is the largest collection of Dali’s work outside Europe.

The St. Petersburg Shuffleboard Club (1924) is the world’s oldest and largest shuffleboard club, with more than 70 courts.

Shuffleboard under the lights

“Thrill Hill,” well-known to residents of very flat St. Petersburg, is a bridge over Salt Creek – built around 1930 to allow small boats to pass under it.

The Vinoy Park Hotel in St. Petersburg dates from 1925. In the early days, it was only open December to March. It was vacant for about 20 years, starting in 1974, before renovation.

In nearby St. Pete Beach (pop. 9,346), the Don CeSar Hotel, built in 1928, was a favorite of celebrities during the Jazz Age. It also sat empty for some years before renovation and reopening – in 1973.

Tarpon Springs (pop. 23,484) has the largest percentage of Greek-Americans (about 12%) of any city in the U.S. Many Greek immigrants came to the city as sponge divers in the early 1900s.