Manatee County (pop. 322,833) is west of Hardee County, on the Gulf of Mexico and partly on Tampa Bay. Almost all of the population is in the coastal areas.

The Linger Lodge restaurant in Bradenton is known for the stuffed animals on the walls, as well as for its menu, which includes “fresh alligator bites” and fried green tomatoes.

Tropicana, Inc., was founded in Bradenton in 1947. Its headquarters are now in Chicago, but it still has its huge plant for processing fruit juice in Bradenton.

The aquarium at the South Florida Museum in Bradenton is the home of Snooty (age 67) the world’s oldest known manatee.

The Pittsburgh Pirates have their spring training home at McKechnie Field (1923) in Bradenton. The Pirates have been there since 1969.

The De Soto National Memorial, five miles west of Bradenton, commemorates the landing of Spanish explorer Hernando de Soto in 1539 – the first extended exploration of the area by Europeans.

Lake Manatee State Park is in the central part of the county. 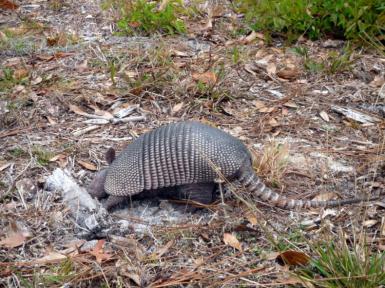