The county was named for Andrzej Tadeusz Bonawentura Kosciuszko (1746-1817), a Polish-Lithuanian military leader who fought on the American side in the Revolutionary War.

The county seat of Kosciusko County is the city of Warsaw (pop. 13,559), named for the capital of Poland.

Warsaw has long been known as the “Orthopedic Capital of the World” because of its cluster of industries and services related to orthopedic (or orthopaedic) devices.

The Wagon Wheel Center for the Arts in Warsaw hosts the Symphony of the Lakes and a variety of other concerts and plays.

Theater in the round

Just east of Warsaw, the town of Winona Lake (pop. 4,908) is the home of Grace College and Theological Seminary. Evangelist Billy Sunday (1862-1935) lived in Winona Lake for many years.

The town of Mentone (pop. 1,001) calls itself the “Egg Basket of the Midwest” because of its large commercial egg enterprises. Mentone has an annual Egg Festival. 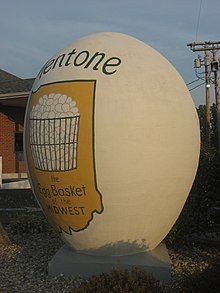 B-29 manufacture in Georgia