White County (pop. 24,643) is east of Benton County. It’s one of five White counties in the U.S. – all named for different men named White.

This White County was named for Isaac White (1776-1811), who died in the Battle of Tippecanoe – between U.S. forces and Native Americans led by Tecumseh – near present-day Lafayette, Indiana. 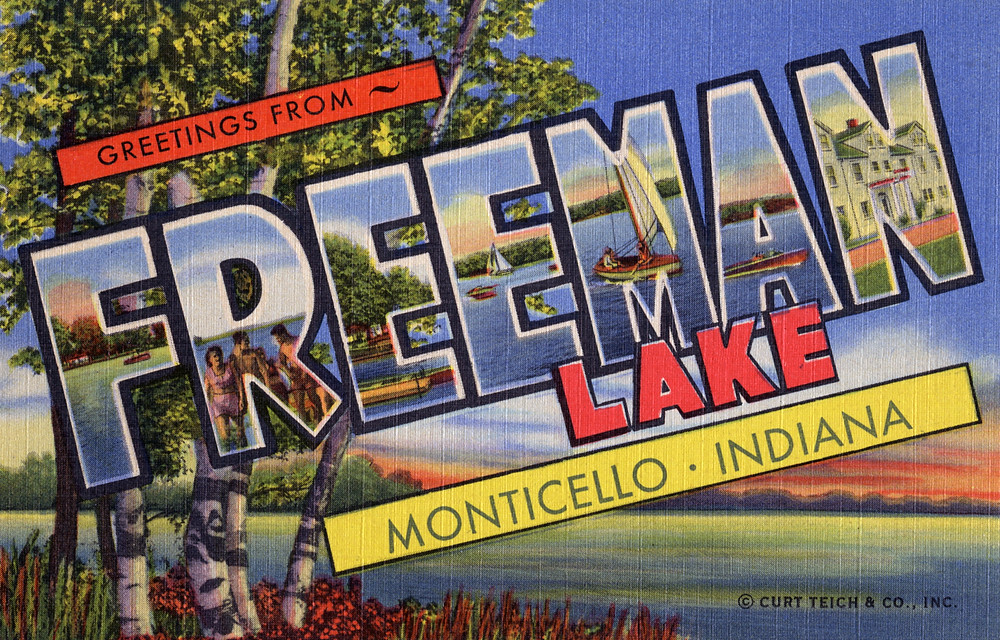 Dams on the river form Lake Freeman and Lake Shafer.

The county seat of White County is the city of Monticello (pop. 5,378). The Lafayette Bank & Trust building in Monticello was built to resemble Thomas Jefferson’s home in Virginia.

Monticello has a drive-in movie theater, the Lake Shore, that dates from 1949.

Now closed for the winter

The Monticello Tornado on April 3, 1974, destroyed much of the city’s central business district, killing eight persons and injuring more than 350. The tornado did more than $100 million damage in the Monticello area.

The 1894 courthouse was destroyed.

The Whyte Horse Winery in Monticello has a tasting room in a renovated 1886 farmhouse.

The Madam Carroll (1976) is an excursion boat on Lake Freeman, just south of Monticello. The boat has a capacity of 500 passengers.

“The biggest boat in Indiana”

The nearby town of Brookston (pop. 1,554), whose motto is “The Star of the Prairie,” has an annual Apple Popcorn Festival.

The Monon Railroad, which operated mainly in Indiana, was named for the town of Monon (pop. 1,777). Monon is now the home of the Monon Connection Museum and Whistle Stop Restaurant.

The town of Wolcott (pop. 1,001) was the starting point for Bobbie the Wonder Dog’s legendary 2,500-mile walk to his home in Oregon in 1923, after being separated from his family.