Harrison County (pop. 39,364) is west of Floyd County, along the Ohio River. Its population has grown in every decade since 1940.

It’s one of eight Harrison counties, and one of the four named for President William Henry Harrison (1773-1841). He was governor of the Indiana Territory when the county was named.

The Capitol is now a State Historic Site.

The Battle of Corydon, in 1863, was the only Civil War battle fought in Indiana.

The current Harrison County Courthouse replaced the old State Capitol building, which was the courthouse for many years. 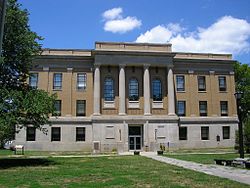 The Harrison County Fair has been running for 156 straight years – the longest consecutively running fair in Indiana.

Indiana’s state Constitution was debated and drafted under the “Constitution Elm” in Corydon. The tree died in 1925, but its trunk is still a local landmark.

Harrison County has several caves that are open to the public. Indiana Caverns, just south of Corydon, is Indiana’s longest cave system.

The town of Milltown (pop. 818), northwest of Corydon, has one of Indiana’s best shoe trees.

The riverboat is a four-deck casino.

Harrison Spring, just north of the unincorporated community of White Cloud, is the largest spring in Indiana. It has an average discharge of 100 cubic feet per second.

Owned by the Nature Conservancy

The steep hills of the Knobstone Escarpment are the most rugged terrain in Indiana.