Perry County (pop. 19,338) is southwest of Crawford County, on the Ohio River.

Perry County is considered to be Indiana’s hilliest county; much of it is in Hoosier National Forest.

“The Hero of Lake Erie”

The county seat of Perry County is the city of Tell City (pop. 7,272), founded by Swiss immigrants and named for Swiss patriot William Tell.

The athletic teams at Tell City High School are known as the Marksmen.

Just east of Cannelton is “The World’s Largest Celtic Cross Carved From a Single Rock.” The unincorporated community of Rome is the home of Old Perry County Courthouse, built in 1818. It was the county courthouse until 1859. 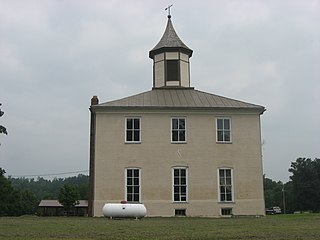 Later used as a school