Okeechobee County (pop. 39,996) is west of Martin County and north of Lake Okeechobee. The lake got its name from the Hitchiti Indian words “oka” (water) and “chobi” (big).

It is one of the six inland counties known as Florida Heartland – a mostly rural and agricultural area, with much less tourism than other parts of Florida.

The Okeechobee Hurricane of 1928 was one of the deadliest and most destructive hurricanes in U.S. history. The lake overflowed and flooded hundreds of square miles, with water reaching depths of up to 20 feet.

Martin County is one of the five counties that meet in the middle of Lake Okeechobee, the largest freshwater lake in Florida.

Average depth of only 9 feet

The county seat of Martin County is the city of Stuart, the “Sailfish Capital of the World.”

Downtown Stuart has an intersection known as Confusion Corner. It has eight different roads entering it, plus a railroad track. The Stuart Welcome Arch (1926) is actually in the nearby community of Jensen Beach. The city limits were changed after it was constructed.

The wealthy town of Jupiter Island (pop. 817) has been the home of sports and entertainment celebrities such as Tiger Woods, Greg Norman, Celine Dion, and Alan Jackson.

Ocean Breeze (pop. 354) is a town made up entirely of the residents of the Ocean Breeze mobile home park.

The House of Refuge, built on Hutchinson Island in 1876, is the last remaining shipwreck life-saving station on Florida’s Atlantic Coast. It is now a museum. 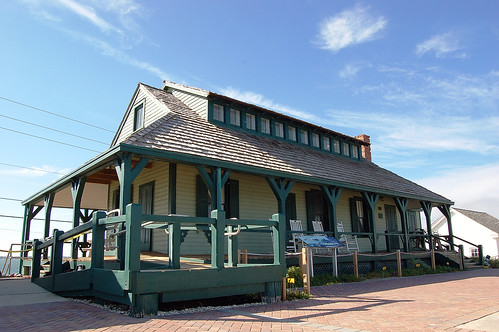 A haven for shipwrecked sailors

The unincorporated community of Indiantown is the home of Payson Park Thoroughbred Training Center. Davy Jones (1945-2012) of the Monkees had 14 horses there.

He died there of a heart attack.