It is one of 11 Crawford counties, which were named for three different men named Crawford. This one was named for Col. William Crawford (1722-1782).

The county seat of Crawford County is the city of Meadville (pop. 13,388), which was the first permanent settlement in northwestern Pennsylvania.

The zipper, as we know it, was invented in Meadville. Talon Zipper, founded in 1893 in Chicago, began mass-producing zippers in Meadville in the 1920s.

No longer in Meadville

The Academy Theatre in Meadville opened in 1886 as an opera house called the Academy of Music. It was later a movie theater, and now hosts a variety of performing arts.

Meadville is the home of Allegheny College, a private liberal arts college founded in 1815. It has about 1,900 students.

Meadville is also the home of the PennDot (Pennsylvania Department of Transportation) Road Sign Sculpture Garden. 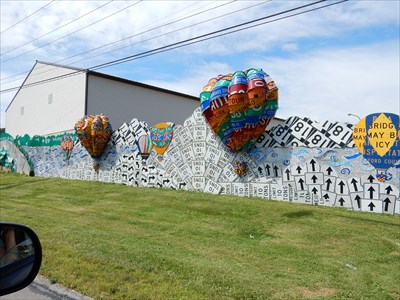 Murals and sculptures made of road signs

The Baldwin-Reynolds House Museum in Meadville was the home of U.S. Supreme Court Justice Henry Baldwin (1780-1844). It had Meadville’s first indoor plumbing.

The city of Titusville (pop. 5,601), east of Meadville, has a campus of the University of Pittsburgh, established in 1963.

The Drake Well Museum, south of Titusville, covers the birth of the oil industry by Edwin Drake in 1859. 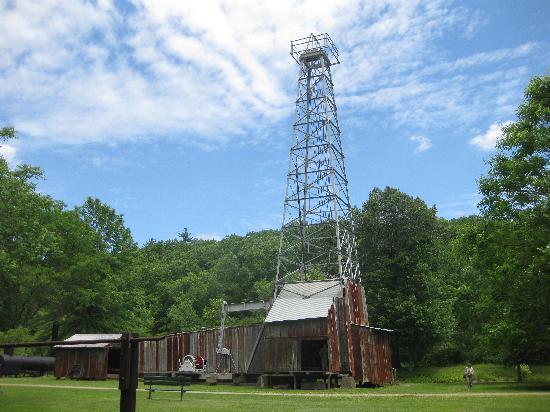 The Oil Creek and Titusville Railroad, a 16-mile tourist railroad, has a Caboose Motel.

In the community of Linesville (pop. 1,040), it is popular to throw bread at the carp at the Spillway adjacent to Pymatuning Lake. It’s been called “Pennsylvania’s 2nd-Most Popular Tourist Attraction.”

The Kennedy Space Center, on Merritt Island, has been the site of the Apollo moon landing program, Space Shuttle launches, and much more.

Brevard County was given the 321 area code in 1999 (formerly belonging to a Chicago suburb) to commemorate the countdown sequence for spacecraft at Cape Canaveral.

Space-related tourist attractions in the area include the Astronaut Hall of Fame, Shuttle Launch Experience, and Space Walk of Fame Museum.

Also the Police Hall of Fame is in Titusville

The county seat of Brevard County is the city of Titusville (pop. 43,761).

The city of Melbourne (pop. 76,068) was the birthplace (in 1943) of Jim Morrison of The Doors. San Francisco Giants manager Bruce Bochy graduated from Melbourne High School.

The real city of Cocoa Beach (pop. 11,231) was the fictional home of astronaut Larry Hagman and genie Barbara Eden in the 1960s TV series “I Dream of Jeannie.”

The First United Methodist Church of Cocoa has a weekly drive-in service.

The 25-mile-long Canaveral National Seashore is the longest expanse of undeveloped land on Florida’s Atlantic coast.