Santa Rosa County (pop. 151,372) is in the western part of the Florida Panhandle. Its population has grown from just 37,741 in 1970, with the expansion of bedroom communities for military bases in Santa Rosa and adjacent Escambia and Okaloosa counties.

The only Santa Rosa County in the U.S., it was named for Saint Rosa of Viterbo (c. 1233-1251), who reportedly converted all the residents of an Italian village by standing for three hours in the flames of a burning pyre and walking out unscathed. 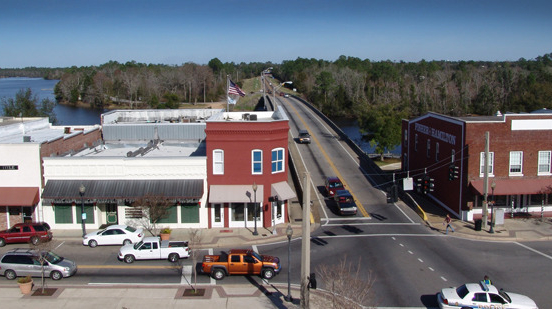 In Milton’s early years, it was known as Scratch Ankle, because of the briars along the banks of the Blackwater River.

The former Louisville and Nashville Railroad depot (1909) in Milton is now the West Florida Railroad Museum.

Milton is the home of Naval Air Station Whiting Field, one of the Navy’s two primary flight-training bases.

The city of Gulf Breeze (pop. 5,763) is on the Fairport Peninsula, which extends west into Pensacola Bay, with Escambia County on three sides.

Shoreline Park in Gulf Breeze has a reputation as a center for UFO sightings. The community of Bagdad is the hometown of golfer Gerry Lester “Bubba” Watson, who won the Masters Tournament in 2012 and 2014.

The community of Chumuckla, northwest of Milton, canceled its 17-year-old Redneck Christmas Parade in 2014 because of excessive rowdiness.

The parade was replaced with a “Redneck Mud Run.”

Much of the northern part of Santa Rosa County is in Blackwater River State Forest.